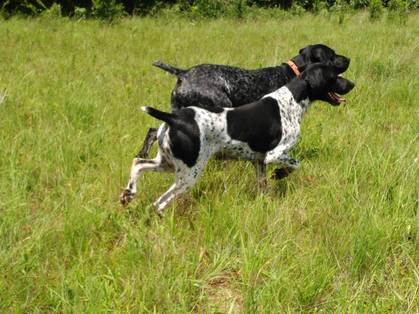 We are really excited about this addition to our kennel.  In our opinion, "Bella" comes from  the best bloodlines of any black and white pointer in the USA.  Her  father is 5X NSTRA Champion Rockin G's Uodibar Rusty.   He is a superior bird dog with the titles to back it up.  He is serious bird dog with serious bragging rights.  Rusty was the first black and white German Shorthair  stud dog to earn any type of Field Trial Championship with NSTRA.
In addition he currently  holds the record for the most wins by a  black and white German Shorthair in NSTRA  history as of 1/1/12. Bella's father "Rusty" comes from world renowned bloodlines and has a 5 generation pedigree that includes 25 Champions, including German Champions  and 5 different dogs that are  in the GSP HALL OF FAME.

Bella's mother is 2XNSTRA Champion, Rockin G's Dixieland Fritzie, who is also extremely well bred and her lines can be traced back the world famous Hege-Haus Kennels!  Bella's Grandmother and Fritzie's mother is 3x NSTRA  Champion Dixieland's Black Magic. She  was the first black and white female German Shorthair  to earn any type of field trial championship NSTRA. Bella's Grandfather and Fritzie's sire is 3X National Champion - 16X NSTRA Champion Crosswind Truckin Fritz. As you can see from this breeding and power pedigree, we  are very excited about Bella's future here at Power Pointers!